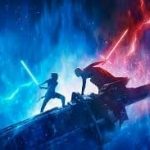 In the beginning, there was the Word…or a bunch of words, anyway. They began with, “It is a period of civil war. Rebel spaceships, striking from a hidden base, have won their first victory against the evil Galactic Empire.” Once seen, it was impossible to forget. Film historians will tell you the first blockbuster was Steven Spielberg’s Jaws in 1975. That’s true, but there’s a galaxy’s worth of difference between a blockbuster and a frickin’ phenomenon. On May 25, 1977, Star Wars changed everything. The brainchild of George Lucas erupted from theaters and soon laid claim to... Read More